Over a year ago, I wrote “Adding harmonic distortions with Arduino Teensy”. In that post, I happened upon a way to apply any arbitrary profile of harmonics using a Teensy-based waveshaper (just except that waveshapers categorically can’t vary the phase of each harmonic). I used that project to replicate the “musical” distortion of tube amplifiers, but I had forgotten about the other purpose of those things: sound synthesis. Guitar pedals, soft clippers, and bit-crushers–that is, pushing distortion to the point of musicality in its own right. That was where all the established literature was! Even in 1979, there was “A Tutorial on Non-Linear Distortion or Waveshaping Synthesis”.

I happened upon the same thing in an overcomplicated way, but it helped me learn the practical nuances of waveshapers. Let me show a mix of my own and the established method. Compared to what I did before, it’s easier to implement and much more concise.

How to generate a waveshaper function in four steps!

The above function, $f_2(x)$, is your final function. Evaluate it at as many points within $-1 < x < 1$ as can fit in your waveshaper’s LUT! If the input sine wave swings exactly within $-1 < x < 1$, then the ratios $\alpha_n$ will be realized. Otherwise, different and smaller ratios will occur.

Steps 1 and 2 are inspired by that 1979 paper, but steps 3 and 4 were my own. Step 4 was a practical move. It responds to the Teensy waveshaper only accepting points between -1 and 1. If that isn’t true for your waveshaper, then you’re at liberty to do something else–as long as you don’t clip your signal unintentionally! On the other hand, step 3 represents a constraint that I haven’t seen online. Specifically, we shouldn’t want to map zero to something non-zero because that would cause constant DC! This is why I subtracted $f_0(0)$.

Chebyshev polynomials can be used in a rigorous approach to building waveshapers. In this context, their claim to fame is that they can twist a $\cos(x)$ wave into its $n$-th harmonic, $\cos(nx)$. Somehow, high school algebra and trigonometry are all you need to use them. 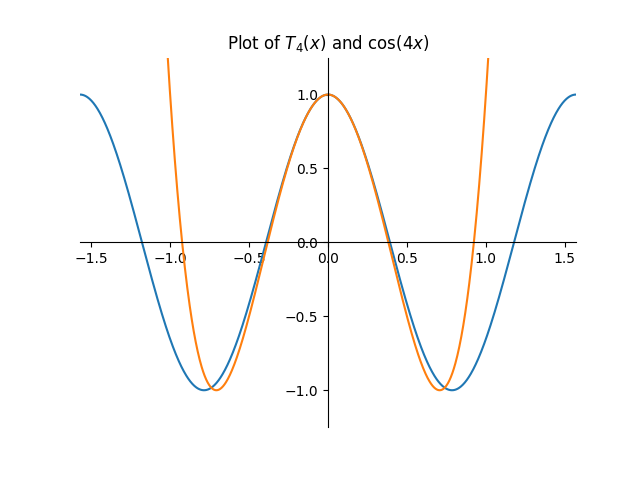 Okay, my only reason for bringing up $T_4(x)$ was this intuitive-looking plot. Phase shifts usually get in the way of the intuitive nature, but not for $n=4$. That aside!

The final product of waveshapers should be a sum of the original wave plus some new harmonics. According to $T_n(\cos(x)) = \cos(n x)$, the Chebyshev polynomials stand in for the new harmonics, and so we simply take a weighted sum.

That said, something is wrong with the result of step 2. Often, we’d want to input a wave of some varying amplitude $a(t) \leq 1$ (i.e. an ADSR envelope) or even an arbitrary input. I don’t know where the impacts end. At the very least, I can address one of them: DC shifts.

For $a(t) = 0$, a waveshaper will see nothing but zero, and it may decide to map that to something nonzero. This is because Chebyshev polynomials weren’t defined with that in mind. For example, $T_2(0)=-1$. If my headphones saw -1 volts at DC, they’d blow. From my old post, I only saw that happen when I added even harmonics, and I’ve seen that adding a constant equal to $\alpha_n$ or $-\alpha_n$ would correct that. Ultimately though, the easiest way to correct this effect is to just evaluate the waveshaper function at $x=0$, then subtract that value. That’s step 3. Finally, this addition technically could be considered as a part of the weighted sum in part 2. Specifically, it would be as $\alpha_0$ of another Chebyshev polynomial, $T_0(x)=1$, that represents a “zeroth” harmonic or 0 Hz. I just wouldn’t wish upon anyone the task of solving for $\alpha_0$ without evaluating the rest of the sum first.