This guide is complete, but I’ve since written a concise 5-step guide to achieve the same thing, based on Chebyshev polynomials, along with more discussion about harmonic distortion.

A couple months ago, I picked up a Teensy 4.0 and the Audio Adapter Board because I wanted a cheap but simple platform for trying DSP on my music. One of the things I lately wanted to try was adding harmonic distortion, especially since it usually gets the credit for the sound of tube amplifiers. To accomplish this, I did some calculations, and I found out that I could apply any harmonic distortion profile I wanted (with a caveat). The key was using the Teensy Audio library’s waveshape block.

I posted my code on Github. Essentially, it takes in one factor for each harmonic order, and this factor is the maximum ratio between the fundamental and the harmonic amplitudes, achieved if the fundamental swings over the entire digital range. Otherwise, the real ratio will be smaller, but real tube amplifiers also behave like this. 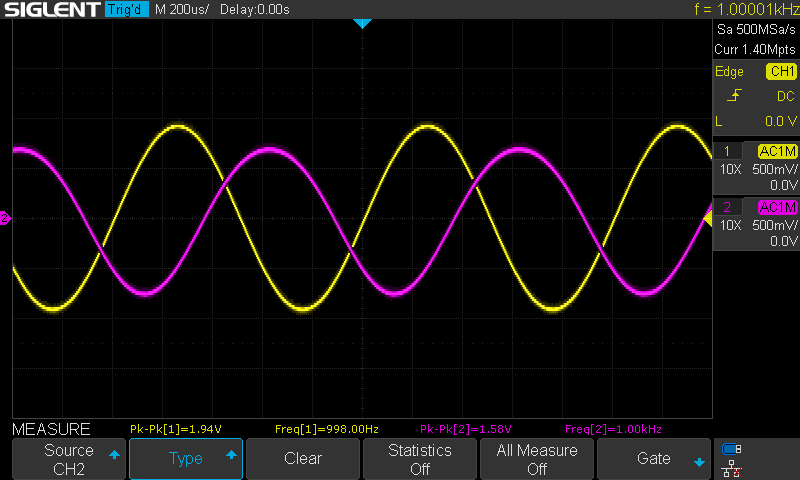 1kHz sine wave going into and out of the Teensy 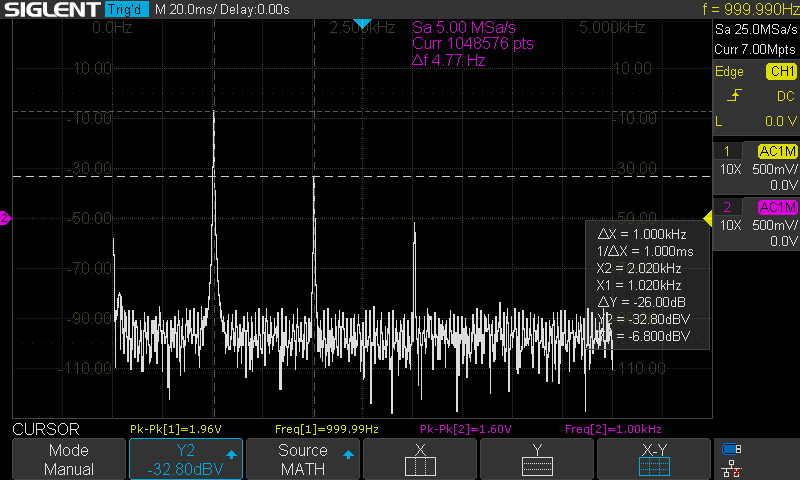 FFT of 1kHz sine wave out of the Teensy, 2nd harmonic at -26dB 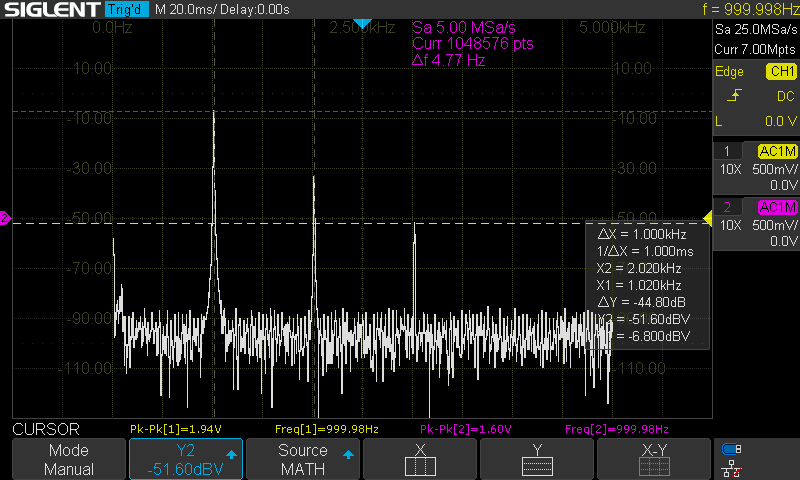 I initially measured this with a cheap DSO138, but it was introducting artifacts that wouldn’t let me see clearly beyond the second harmonic. However, measuring this with a proper oscilloscope showed that the Teensy got it spot-on.

Listening to it, I can agree with the people saying that harmonic distortion adds a little more body to the music. That was more clear when I felt a little something was missing as I switched it off. But I struggled to pick it out, even with a ratio of 0.05 (equivalent to a <=5% THD)! Anyway, this could explain why people gravitate toward the Darkvoice 336SE, which claims a THD of <2%.

Beginning with a pure sine wave represented by the function $f(x) = \sin(x)$, we can add second harmonics by adding a $\sin(2x)$ term. This gives us $f_1(x)=\sin(x)+\alpha \sin(2x)$ where alpha represents the ratio between the second harmonic and the fundamental. In fact, if this harmonic is all we add, $\alpha$ is exactly the THD. 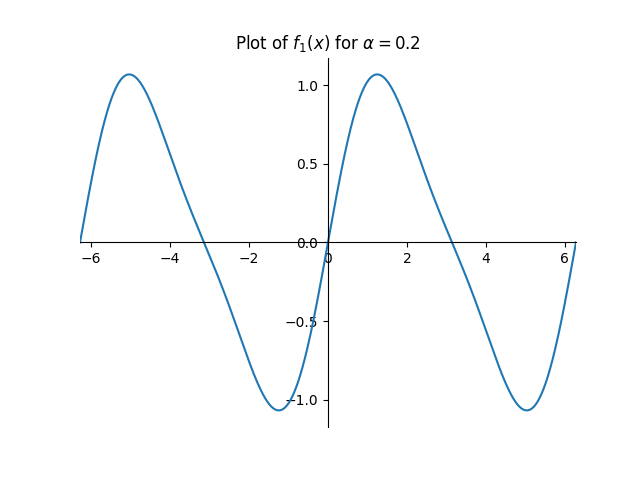 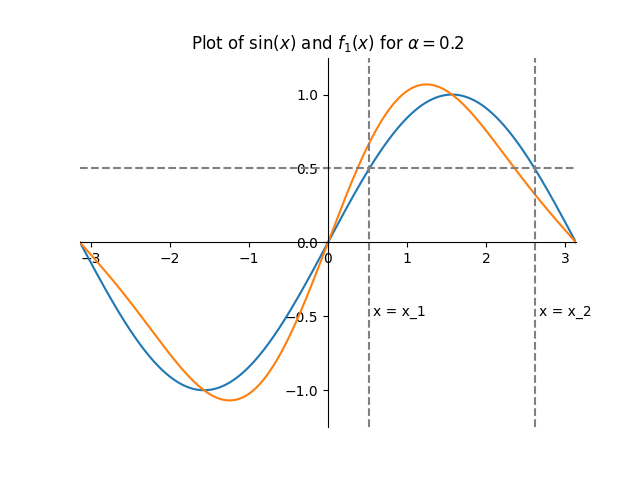 Really though, there is no obvious way to acquire $x$. Instead, mapping value to value, $y$ to $y_\text{new}$, is exactly what the Teensy Audio waveshaper can do. So, this whole harmonic distortion trick can be implemented just if $f_1(x)$ outputted the same for $x_1$ and $x_2$, allowing us to ignore the question of which $x$. In this example, we just need to shift the second harmonic by $-\frac{\pi}{2}$. This gives the function $f_2(x)=\sin(x)+\alpha \sin(2x-\frac{\pi}{2})$, and that is the one caveat we have to accept if we want to produce harmonic distortion this way. 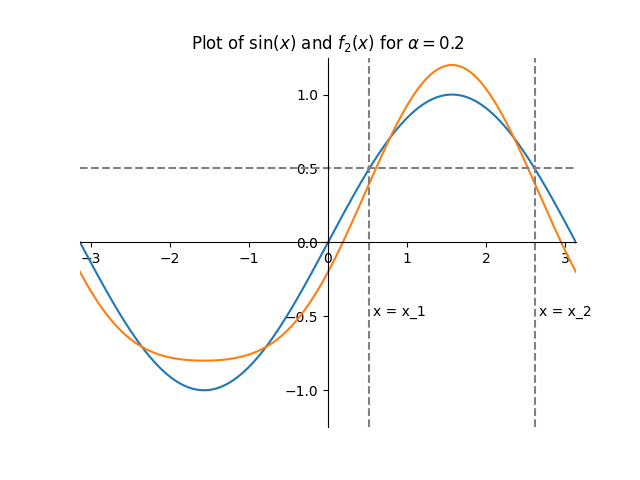 This can easily be generated with a waveshaper. However, there are a couple final steps before making this into a lookup table that we can use. First, right now we would be mapping the value zero to something nonzero, and this would introduce a constant DC offset to our signal! We can fix this by adding a constant term equal to $\alpha$. Next, the Teensy Audio waveshaper does not accept mappings that are outside the range $[-1, 1]$. We can fix this by dividing the entire function $f_2(x)$ by the maximum absolute value it reaches, $f_{2, \text{absmax}}$. Yes, this is a normalization. 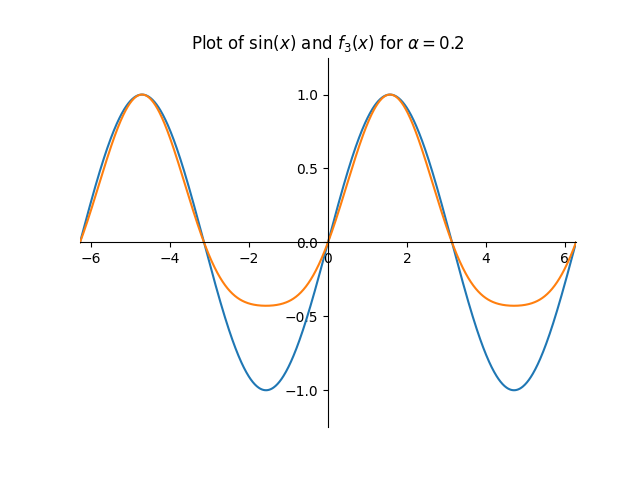 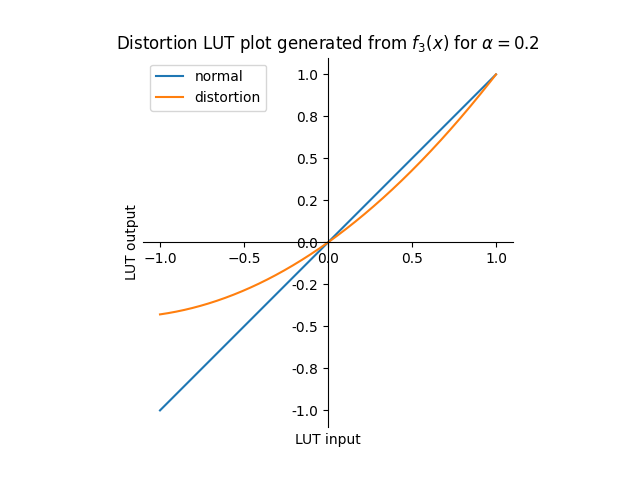 This process is possible for any desired harmonic. We just need an appropriate phase shift, and I’ve found that to be $-(n-1) \frac{\pi}{2}$ where $n$ is the order. Another thing, adding an odd harmonic doesn’t add a constant DC shift, so it does not need an additional constant term. Another another thing, adding every other even (4th, 8th, etc) harmonic causes a constant DC shift in the opposite direction, and that has to be compensated by adding $-\alpha$ instead.